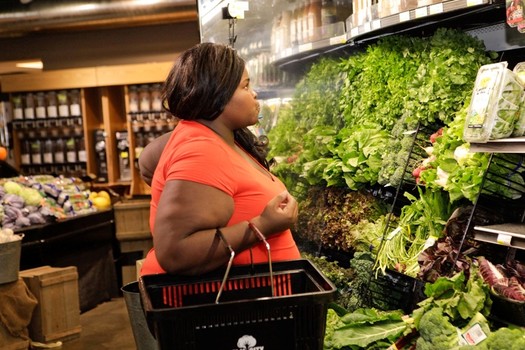 Imagine you were watching a news segment on the obesity epidemic in America and instead of a video of an overweight woman eating pizza you saw the image pictured above? How would it change your perception about obesity? How do you think it might affect how other people think about the behaviors of overweight people? A new study finds that the images we see every day of overweight people do have an impact on our perceptions. And they are often not positive images at all.

The Yale Rudd Center for Food Policy and Obesity Research released a study this month that found that mainstream media perpetuates public bias against people with obesity by showing negative and stereotyped images of them on television and on the web.

The study looked at online media outlets and found that overweight and obese adults and children were far more likely to be depicted from rear angles, eating junk food, or photographed from the shoulders down, showing just their mid-sections. These images reinforce perceptions that people who are heavy must also have bad eating and exercise habits — and that people who are thin do not.

Weight bias is a serious problem for people suffering from obesity. Nearly two thirds of the children seen in the Live Light Live Right program suffer from weight bias issues at schools and even at home.

“Although many deny it, there is enough scientific evidence that weight bias — which is more prevalent than race, sex, color, religious belief [bias] — is widespread and very resistant to change,” Live Light’s executive director Dr. Sarita Dhuper told the Philadelphia Enquirer last summer.

Share with us your experiences with weight bias. As a parent, have your children every come home saying they were teased because of their weight? How did you handle it?