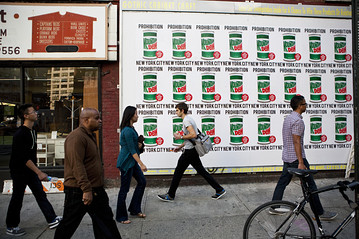 In a little more than a month from now, New Yorkers won’t be able to buy large sugary drinks and sodas anymore. The city’s Dept of Health banned the sale of these drinks and the new rules will take effect in March, as the Wall Street Journal reported.What does that mean for you?

Well, it means if you go to a restaurant, a deli or the movies you won’t be able to buy a soda or sugary drink that is larger than 16 ounces. No more super sized drinks!

The new rule was put into place after Mayor Michael Bloomberg targeted these drinks because sugary drinks contribute to obesity. Opponents are considering suing the city to block the plan and most New Yorkers oppose it. But the mayor argues that if people reduce their portion sizes and drink smaller amounts of soda, they will consume fewer calories.

What do you think about the ban? Do you think it will help people drink less sugar or do you think the ban doesn’t let people make their own decisions?